How do you access network traffic today? Are you able to monitor traffic without adding points of failure or affecting network performance?

The first building-block to your visibility architecture is access to the data. That comes in one of two forms: a network tap, or a switch port analyser (SPAN) port (also known as port mirroring). But which is the right one?

A Network Tap captures network traffic in both directions and sends it to a monitoring device such as an Intrusion Detection System (IDS) or statistics traffic generator. Network taps optimize monitoring, security, and storage by enabling access to network traffic, reliably and unobtrusively.

Network Taps can be deployed passively at any inline connection on the network to provide 100% visibility for monitoring and security tools. A more effective solution than SPAN ports, Network Taps deliver all full-duplex network traffic—including Layer 1 and Layer 2 errors—to these devices as though the devices were deployed inline

How do you get instant access to full-duplex traffic for security analysis?

Are you able to scale your monitoring infrastructure to support multiple tools without increasing the complexity of your network architecture?

Are you concerned about SPAN port contention and switch degradation?

Switched port analyser or SPAN ports on network devices can also be used to monitor network traffic. However, the SPAN approach results in several costly disadvantages:

In contrast, Network Taps pass traffic at wire-speed, are more reliable and immune to external attacks, and require little or no configuration to scale with network and technology needs.

A physical Ethernet tap provides complete traffic visibility and access to any network connection. A copper tap can be deployed onto any inline copper network link, delivering permanent monitoring access ports. The copper tap provides an out-of-band monitoring or security tool, with all traffic as if it were sitting inline. The taps send copies of traffic, including Layer 1 and Layer 2 errors, from each side of the full-duplex network link to its respective monitor ports. Network Taps provide network isolation, dropping any traffic that is accidentally or maliciously transmitted back onto the monitor ports. The copper taps are isolated from the network because they have no IP address, eliminating exposure to external attacks. 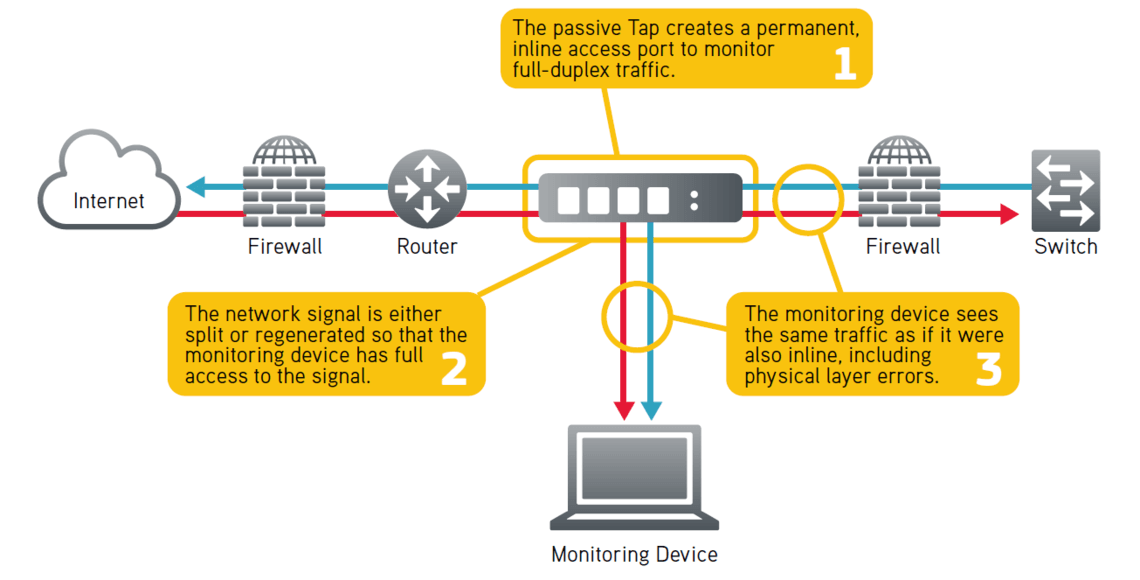 A SPAN port was a concept coined by Cisco used on Catalyst switches (Switched Port Analyzer) for mirroring packets to a port for monitoring purposes. It is software configurable, and you can set a single port to receive any packets sent or received on any “monitored” port. Generally the SPAN port has to be the same physical and logical characteristics of the monitored port. The SPAN port cannot be used for inbound traffic at all, effectively dedicating it for monitoring purposes. Different switches implement SPAN ports different ways — some only allow a single port to be monitored at a single time, some allow multiple ports to be funnelled into a single SPAN monitoring port, etc. But the term “SPAN port” has become synonymous with “port mirroring for monitoring purposes”.

Dedicated packet mirroring devices exist (such as Ixia, NetOptics, Netscout/VSS) whose entire mission in life is to make copies of IP packets. The flexibility they provide is far better than that of typical mirroring ports on a switch. They can generally groom traffic from one physical topology to another, merge and split streams, funnel many small streams to one large stream (e.g. 10 x 1G to 1 x 10G), even filter at L3/4. For flexible packet monitoring, these devices are always the way to go.
No matter what packet mirroring options you pick, you still need a device to capture or otherwise analyse the packets. Modern options include: IDS/IPS devices, DLP device, Security analytics devices, or simple packet capture devices.

Check out this YouTube video for an overview of how Network Taps can provide you with the visibility that your monitoring and security tools need to operate to their maximum effect:

What will be the top areas of cyber security focus in 2021?

Iris Networks are a leading UK VAR specialising in helping clients design, deploy, secure and troubleshoot the core, edge and mobile infrastructure of your network.